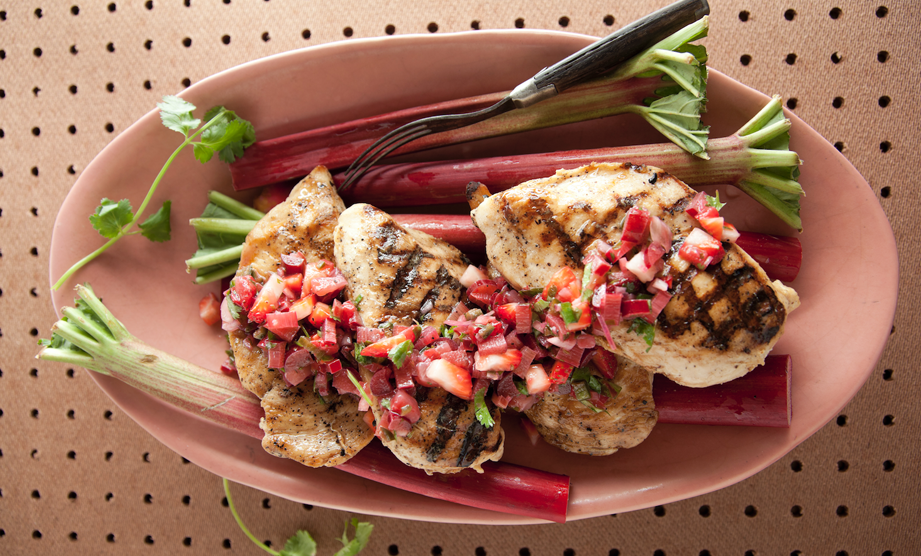 You’ve all seen rhubarb sitting there this time of year in the produce section with its raspberry red colored stalks. But do you ever purchase a bunch? If you’re like most people, aside from an occasional strawberry rhubarb pie you’ve never really given rhubarb a chance. We are all raving about rhubarb and armed with a little knowledge and these four great recipes, we hope to have you reaching for rhubarb on your next grocery visit!

The earliest records of the rhubarb plant are from China and date back as far as 2700 BC. At the time, it was cultivated for it’s medicinal purposes (as a purgative for cleansing the bowels). Marco Polo learned of the rhubarb rhizome on his travels in China and was instrumental in bringing it to Europe. The first records of rhubarb in America were around 1790 from an unnamed gardener in Maine who obtained the root stock from Europe. It was then introduced to growers in Massachusetts and it’s popularity spread so much that by 1822 it was sold in produce markets throughout the region. Although considered a vegetable, a New York court decided in 1947 that since rhubarb was used in the United States as a fruit, it would be counted as a fruit for the purposes of regulations and tax duties paid.

Choose fresh crisp stalks with no browning at the ends from the spring or late fall crop. The color of the stalks can vary from the commonly associated raspberry red to speckled pink and light green.

Rinse stalks in cold water and peel off any stringy bits. Cut all leaves and roots away and wrap in moist paper towels and place in a 2 gallon zip top bag. The clean stalks can be stored (in the refrigerator) for 2-3 weeks. Before use, trim the ends again and stand the stalks in cold water to crisp and refresh them.

Wash and trim stalks. Cut into 1” lengths. Add to boiling water for 1 minute and then immediately shock in a large bowl of ice water. Remove from ice bath and dry with allow to dry before placing in a zip top bag and freezing. This process will help retain the vibrant color and flavor.

A 1 pound bunch contains 3-5 stalks and when chopped yields 2 to 4 cups.

Note: Do not eat rhubarb leaves as they are toxic when ingested.

Rhubarb Recipes to Rave About: