How To: Carve a Turkey 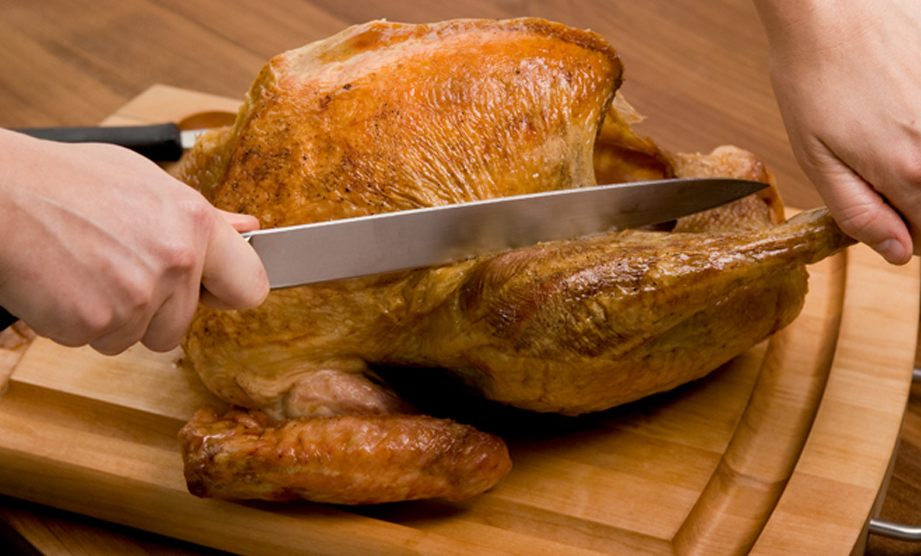 I really don’t remember the year I got passed the holiday turkey-carving baton at Mama’s house…I just remember the mess. Now, it’s a seamless operation for me. I could probably even compete with the best of them on turkey carving speed, but in the beginning, that wasn’t the case. Looking back, I wish I had a how-to article to read with photographs for reference like this one, but when I think about it, I guess I had something even better—my mama. Her, standing over my shoulder telling me every cut to make and a brother with his mouth open waiting, not so patiently, nearby made for a quick study. Happy Thanksgiving, y’all!

Step 1: Cut the band of skin holding the drumstick. Grasp the end of the drumstick. Then, place a knife between the drumstick/thigh and body of the turkey, and cut through skin to joint. Remove the entire leg by pulling out and back, using the point of the knife to disjoin it. Separate the thigh and drumstick at the joint.

Step 2: Make a long horizontal cut above the wing joint all the way through to the body frame. If you desire, the wing may be disjointed from the body at this point.

Step 3: Slice straight down with an even stroke at the top of the breast bone all the way through to the horizontal cut you made in the step prior.

Step 4: Remove the breast to a cutting board and slice starting at the smallest end to the largest.

Step 5: Repeat previous 4 steps on the opposite side of the bird.

Be sure to allow your bird to rest for at least 20 minutes before carving.

Cut the dark meat before the light meat, as it will stay moist longer.

The key in removing the thighs, legs, and wings from the turkey’s body is to run your knife along the body until you find the places where bones meet. By cutting between joints, and not through bones, you can disconnect bones without much fuss.

Don’t throw away the leftover turkey parts or meaty bones—save them for stock. If you don’t have time to make stock right away, put the parts and meaty bones in a zip-top bag and place it in the freezer for future use.

Jamie Deen - Jamie Deen is an entrepreneur, businessman, author, and son of American cooking and lifestyle icon Paula Deen. Jamie has been an integral part of the now legendary business The Bag Lady – the famous sandwich delivery service that launched Paula Deen's success. Working with his mom and younger brother Bobby, Jamie delivered the "lunch-and-love-in-a-bag" that kick-started his mother's professional cooking career in Savannah, Georgia.